The Sentinel Surveillance Network identified no cases of influenza-like illness, thus Luxembourg remains below the recommended threshold for the interepidemic season, according to the European Center for Disease Prevention and Control (ECDC) guidelines.

Regarding SARS-CoV-2 genomic surveillance, the Laboratoire national de santé analysed 266 Luxembourgish specimens in week 30/2021 (from 439 total cases in the Grand Duchy of Luxembourg, 60,6%), including 226 non-targeted specimens (51,5%), which exceeds the minimum coverage (10%) but does not reach the minimum sample size recommended by ECDC (which is 254 in our current epidemiological situation).

Community surveillance revealed a decrease in all VOC cases, including Delta variant; yet, this remains the dominant one in Luxembourg (81%). The other two variants are the Gamma (18,1%) and Alpha (0,9%) ones.

The Laboratoire national de santé, as National Reference Laboratory for Acute Respiratory Infections in Luxembourg, performs close surveillance on respiratory viruses, with a special focus on SARS-CoV-2. There are currently three active projects:

The Sentinel Surveillance Network. It provides a broad picture of respiratory diseases affecting the Luxembourgish population, based on its double monitoring system (syndromic and virological).

The National SARS-COV-2 Genomic Surveillance Program. It enables detailed observation of SARS-CoV-2 mutations and variants through time and space, and also monitoring specific groups of interest.

The COVVAC Serology Project. It assesses the post-vaccination serological status in long-term care facilities and its evolution over time.

The ReViLux provides updates on the first two projects.

Regarding the virological surveillance, no data is available for week 30. 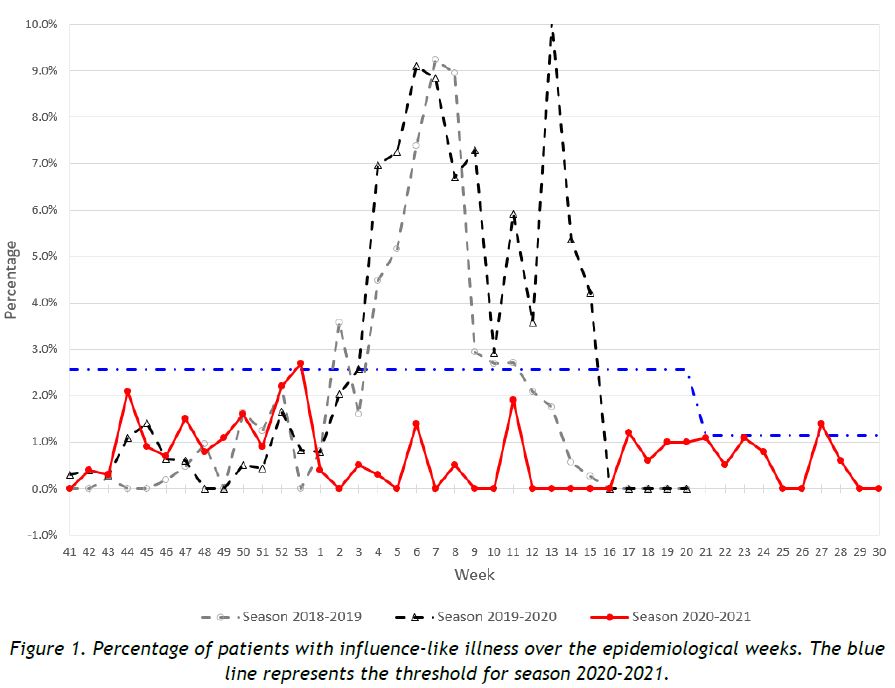 The National Reference Laboratory for Acute Respiratory Infections at LNS receives SARS-CoV-2 -positive samples (nasopharyngeal or oropharyngeal swabs, analysed by RT-PCR) from the national network of laboratories and proceeds as follows:

The sample of community cases is a selection from all cases to detect emerging SARS-CoV-2 variants and early increases in their incidence and transmission within the community in Luxembourg. This sample is selected according to the ECDC guidelines.

The LNS shares its sequencing results with GISAID EpiCov database (www.gisaid.org) periodically. SARS-CoV-2 lineages (variants) have been assigned based on Rambaut et al. using Phylogenetic Assignment of Named Global Outbreak LINeages (pangolin) software  (v3.1.7, pangoLEARN version 2021-07-09). The ReViLux continues to use the Pango nomenclature, in addition to the WHO nomenclature, to allow easier visualization of links between any evolving variants and their ancestor (https://cov-lineages.org). See nomenclature equivalences in Annex 1.

Last week, the microbial genomics platform at the LNS sequenced 314 specimens, with 284 having been collected in week 30/2021. Among the latter, 49 specimens were reported to be part of a cluster or vaccine failure investigation, and 18 specimens were from non-residents (9 specimens overlapping). The number of non-targeted specimens from Luxembourgish residents successfully sequenced this week was 226 (51,5% coverage of 439 total cases) (see coverage trend in Figure 2). 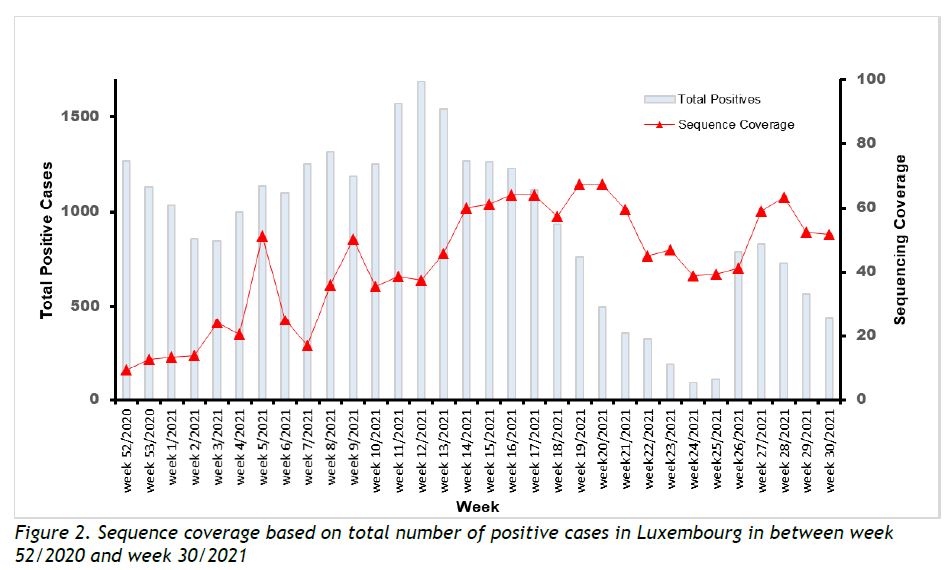 The evolution of variants over the weeks is shown in Figure 3. The number of cases decreased for all VOCs, but Delta variant remains the dominant one. 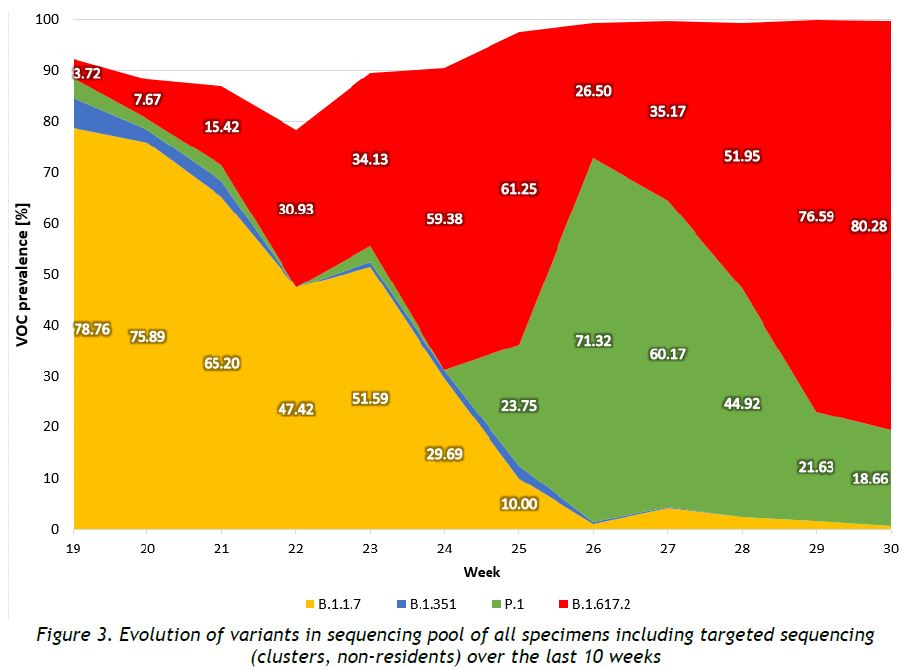 In week 30/2021, 3 circulating SARS-CoV-2 variants were detected within our population sequencing pool, after removal of cluster specimens, and excluding specimens collected from non-residents, as shown in Figure 4. The most prevalent lineages are displayed in Table 2 and information about the lineages is provided in Annex 2. 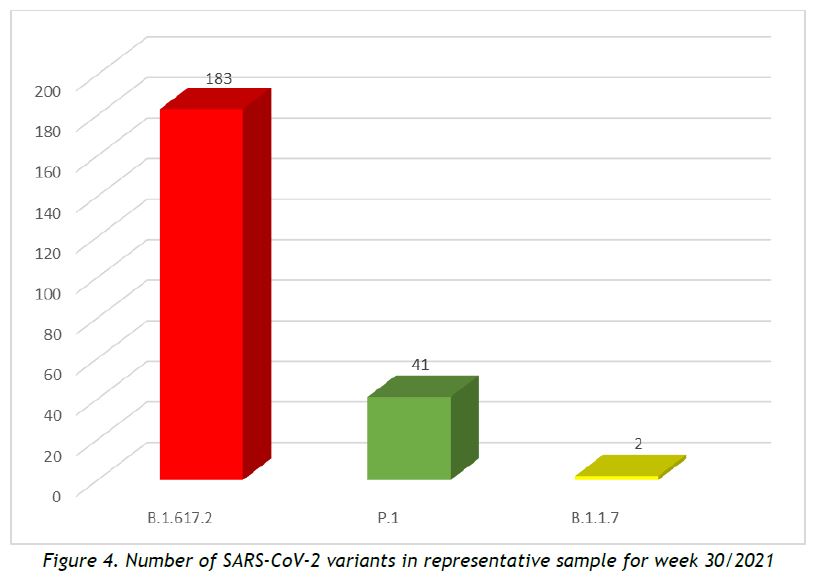 In addition to the surveillance of SARS-CoV-2 variants, the LNS monitors the occurrence of SARS-CoV-2 mutations assumed to have a clinical and epidemiological relevance. Currently, 13 mutations are being observed, and this list is updated continually. 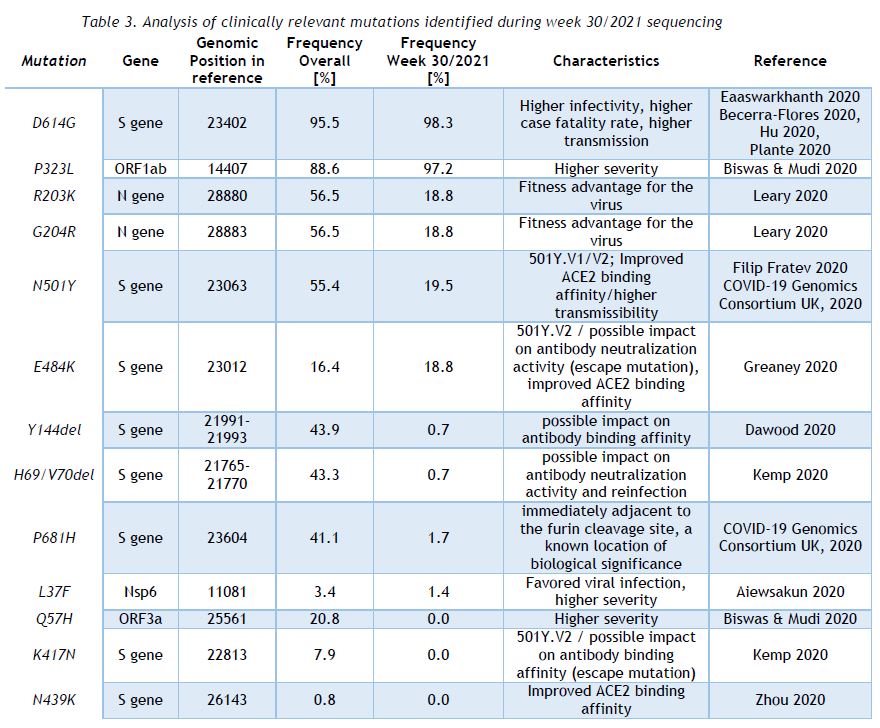 The ReViLux continues to use the (Pango) system to allow easier visualisation of links between any evolving variants and their ancestor. Equivalence for most frequently used VOC nomenclatures are shown in Table A1 (adapted from WHO). 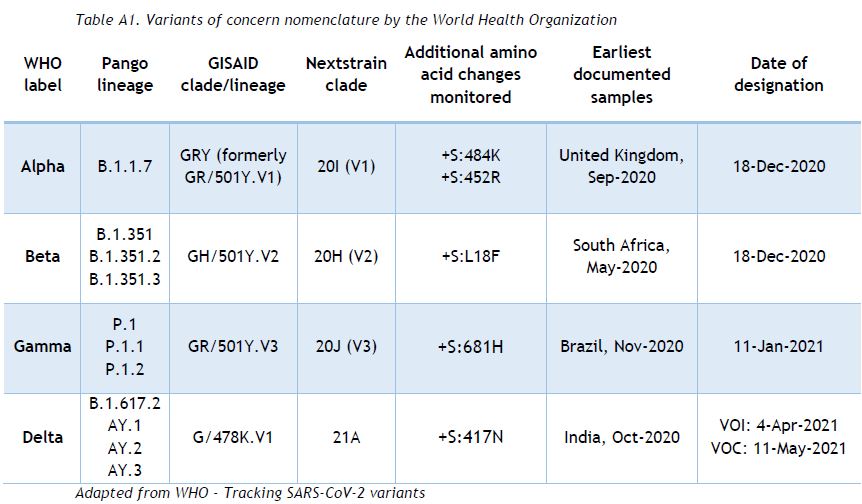 Annex 2. Summary of evidence regarding the most frequently detected variants in the Great Duchy of Luxembourg

Lineage B.1.1.7 is characterized by several spike protein mutations, including N501Y, H69/V70del and P861H. The variant seems to have a considerable epidemiological impact, as it has a higher transmissibility rate.

Lineage B.1.351 holds numerous spike protein mutations, of which three are located in the receptor binding domain (K417N, E484K and N501Y), and are therefore relevant for antibody binding. As for B.1.1.7, a higher transmissibility rate and viral loads seem to be associated with this variant. Due to the K417N and E484K mutations, an impact on vaccination efficacy and possibility of reinfection is subject to scientific investigation.

Lineage B.1.617 is a variant first detected in India and was designated “Under Investigation” on 1st  April 2021 by Public Health England. It contains a number of spike mutations associated with antigenic escape or found in other variants of concern, including L452R, E484Q and P681R. Subtype B.1.617.2 does not carry S:E484Q and seems to be more transmissible than B.1.1.7 (increasing confidence). Neutralization studies show reductions in cross-neutralizing activity between B.1.1.7 and B.1.351.