Genomics tells us the story of the outbreak monophasic Salmonella Typhimurium strain linked to chocolate products. 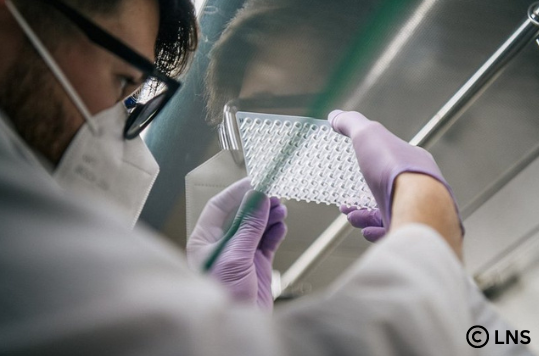 Some weeks before Easter 2022, the United Kingdom (UK) reported to the ECDC surveillance system Epipulse, a cluster of 18 cases with a monophasic Salmonella Typhimurium infection. Comparisons with the reference genome provided by the UK revealed a multi-country outbreak involving 445 cases, as of 3 June 2022, in 12 EU/EEA countries, the UK, Canada, Switzerland, and United States.

Case interviews and epidemiological investigations pointed out to specific chocolate products from a processing plant in Belgium. Most of the cases linked to this food crisis involved patients below 10 years of age and with a severe infection. In Luxembourg, two children were hospitalised. At national level, a multidisciplinary group was urgently set up after the first case had been confirmed at the LNS. Its tasks were to investigate this incident in order to identify the distribution channels of the products and ensure their complete withdrawal from the market, before the traditional Easter egg hunt season started.

Besides the usefulness of sequencing Salmonella isolates for phylogenetic analysis to confirm their link with this outbreak, further in silico analysis revealed specific traits of this epidemic clone. At the beginning, a multi-drug resistant (MDR) profile was highlighted including six families of antibiotics (penicillin, aminoglycosides, phenicol, sulphonamides, trimethoprim and tetracyclines). In some cases, an additional gene encoding resistance to lincosamide was also detected (like in LU).

Five heavy metals were detected in the genome

A retrospective study was conducted at LNS

A retrospective study was then conducted in Luxembourg, focused on the frequency of the qacL gene (enhancing biocide tolerance) in Salmonella Typhimurium/monophasic S. Typhimurium isolated between 2017 and 2022. A collection of 200 genomes were screened and only 4.5% harboured this specific gene. On average, the related strains were also MDR (ranging from 5 to 7 antibiotic types) and possessed genes for resistance to 5 heavy metals. A common plasmid shared between these Salmonella strains suggested that a set of resistance determinants were located in it. A working group has been set up by ECDC to address this specific matter and Epigem is actively involved in these investigations.

In a nutshell, the genomics analysis revealed a genetically well-equipped outbreak strain suggesting a high capacity for spatiotemporal survival and persistence in the industrial animal and food productions. Each of the genetic determinants reflects the different selective pressures that the clone had to face in the past (antibiotics and copper in animal production, biocides in abattoirs and food industries, for example). The presence of the qacL gene may have contributed to the biofilm formation in the chocolate production site.