The Monkeypox outbreak and LNS’ response 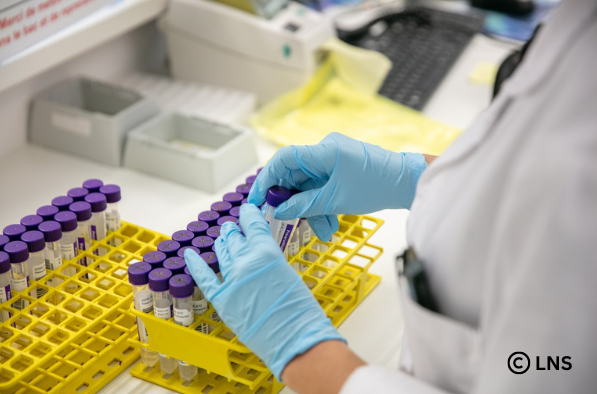 In May 2022, several countries around the world – many of them European – started to detect monkeypox cases with no known connection to regions traditionally considered endemic and informed the World Health Organization (WHO). On the 21st of July, the WHO declared it as a Public Health Emergency of International Concern. 58 cases have been detected in Luxembourg up to this day.

As of 16th November, 79411 confirmed Monkeypox cases and 50 deaths have been reported worldwide. The main reporting countries are the United States (28683), Brazil (9606), Spain (7377) and France (4102). Monkeypox is a viral disease that typically affects animals, but can sometimes be transmitted to humans (zoonosis). Its natural host is mammals (e.g. rodents and primates) from Western and Central Africa, where the disease is endemic and most cases are usually detected. Occasionally, some cases are also detected outside these regions, but generally, they share an epidemiological link to endemic areas (travel, importation of animals, etc.).

In Luxembourg, the last positive case was detected in early November and no deaths have been registered. The positivity rate is at 31.2% (58 out of 186 people tested). All cases except one are male, with an average age of 38 years old. Most of them were identified as imported cases from other European countries (e.g. Germany or Portugal), but some autochthonous cases have also been detected.

In order to further define the detected positive cases, sequencing of the samples was performed. In those cases where the viral load was high enough to enable molecular characterisation, high similarity with other B.1 lineage samples from European countries were observed, but not between them, in agreement with the epidemiological queries suggesting low autochthonous transmission (Figure 2). 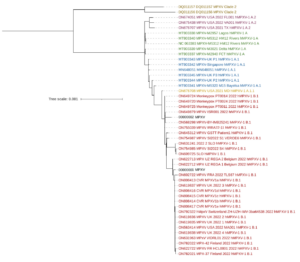 Figure 2. Phylogenetic tree of a subset of monkeypox sequences by maximum likelihood with TIM substitution model, including the successfully sequenced samples from Luxembourg (black) and other samples from the current and previous outbreaks. Source: GISAID.

The Microbiology Department of the LNS has developed a diagnostic algorithm for a molecular diagnostic monkeypox test that allows reporting results within 24h after the sample reception. Laboratory confirmation of monkeypox infection is based on nucleic acid amplification testing (NAAT), using a real-time polymerase chain reaction (RT-PCR), in order to detect unique sequences of viral DNA (Figure 3). 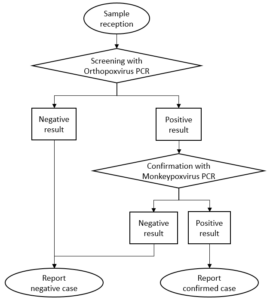 For epidemiological purposes, the samples are sequenced using an untargeted metagenomics approach on the Oxford Nanopore’s GridION platform and results are always communicated to the Health authorities in order to provide them with more information about how the virus spreads. Currently, only clinical samples with a Ct value below 20 are eligible for sequencing in order to increase the detection probability of MPXV-derived sequences.

Vaccination against monkeypox for certain at-risk individuals began at the national service for infectious diseases at the Centre Hospitalier de Luxembourg (CHL; tel.: 4411-3129 for an appointment) on 16 August 2022. To date, more than 700 people have been vaccinated.

The recommendation of the Superior Council of Infectious Diseases (Conseil supérieur des maladies infectieuses – CSMI) of 24 August 2022 provides for the administration of a single vaccine dose to people who have received a previous vaccination against smallpox with a live first or second-generation vaccine (people born before 1977 or those with a typical vaccination scar on their arm).

This disease is caused by the monkeypox virus, which belongs to the Orthopoxvirus genus. It is related to the variola virus, which caused smallpox before its eradication, but monkeypox symptoms are generally milder:

After the infection, the disease usually takes 5 to 21 days to develop, and is generally self-limited, resolving in several weeks. Sometimes, symptomatic and supportive treatment might be administered, and a specific antiviral treatment can also be applied.

Transmission from animals to humans typically happens through direct contact with the infected animal or its secretions, as well as bites or consumption of infected meat that is insufficiently cooked. Transmission between humans is rarer, as the virus does not spread easily between people. However, it can also happen through exposure to respiratory droplets during prolonged face-to-face contact and direct contact with skin lesions or body fluids, as well as shared items. Sexual transmission was not traditionally considered a route of infection but had already been hypothesised in previous outbreaks, and it seems to be playing a key role during the current outbreak. Transmission from humans to animals is a potential risk in Europe, although there is no report of infection of pets or wildlife yet.

Rather low risk of infection

Vaccination against smallpox has been shown to protect against monkeypox, but people born in the late 20th century and this century did not receive this vaccine. Currently, there is a specific vaccine against monkeypox, but given the low risk of infection for the general population and the scarce availability of this product, vaccination is generally restricted to individuals having had contact with a positive case (post-exposure prophylaxis) or at a higher risk of infection (e.g. designated health workers).

The risk of infection during the current outbreak of monkeypox for the general European population is considered low, but moderate for people who have multiple sexual partners. The following precautions should be considered: