At the forefront worldwide: 100% digital cytology at the LNS 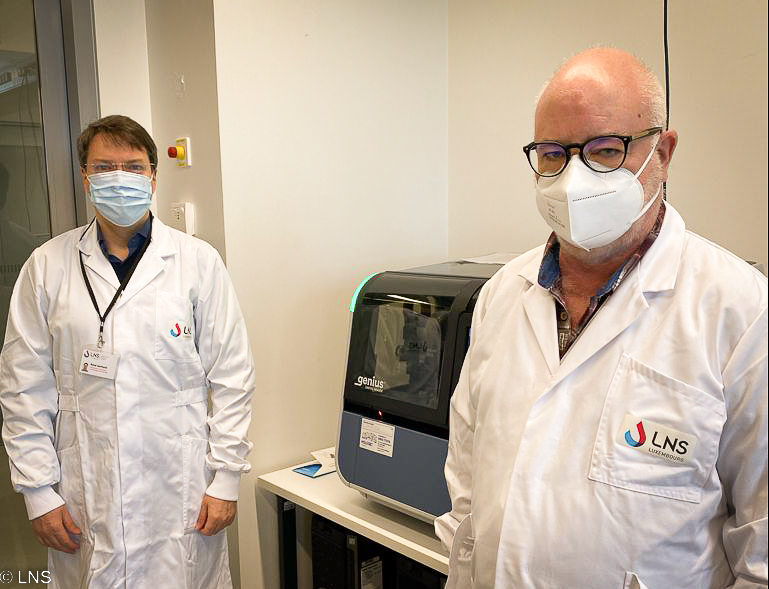 The gynaecological cytology unit of the National Center of Pathology (NCP) at the Laboratoire national de santé (LNS) is one of the first laboratories in the world to go fully digital.

Since July 2022, the average of 800 samples arriving daily at the Laboratoire national de santé are no longer examined under a microscope but are analysed digitally. The scanner acquired in 2021/2022 uses artificial intelligence to sort the cells to be examined for abnormalities on the basis of a series of standardised criteria.

After a test phase during which the scientists were able to get to grips with the device and experiment with it, it was unanimously decided that the procedure would optimise the work processes of the gynaecology unit in the long run. In order for digital cytology to be used in routine diagnostics, the staff submitted the procedure to the Luxembourg accreditation body OLAS for approval. On 8 June, the LNS’ submission was accepted by OLAS and accredited according to the ISO 15.189 standard for digital cytology. On 4 July, the department transitioned to 100% digital cytology.

Clear advantages of a digital procedure

Dr Marc Fischer, head of gynaecological cytology unit at the LNS, highlights the following advantages of the digitised procedure:

“The digital analysis of our samples saves a significant amount of time. Another key advantage is the optimal and standardised evaluation of the samples, where the risk of missing atypical cells is minimal compared to examination by a human being. The system is therefore less prone to error.”

Marc Fischer points out, however, that the diagnosis remains 100% in the hands of the LNS scientists. The artificial intelligence only does the preliminary work of evaluating the results, which continue to be interpreted by the Institute’s pathologists.

After a month and a half of digital cytology, the current statistics are not yet very solid, but it is already possible to identify a few trends, notably the fact that the number of abnormal smears is not decreasing, despite faster treatment. A first assessment is planned after six months. The figures should then be more meaningful. However, the experiences to date give grounds for optimism and indicate that digital cytology can help reduce the number of cervical cancers in the general population.

Luxembourg, the first country in Europe to implement large-scale co-testing

Early detection of cervical cancer through appropriate screening examinations is the primary task of the gynaecological cytology unit. Since 2017, Luxembourg has been applying the so-called co-testing procedure for this purpose, which consists of performing both a cytological examination and an HPV test on a smear.

While a simple HPV test can only determine whether a patient is infected with one of the human papillomaviruses that can trigger cervical cancer, the co-testing method goes further. In addition, the sample is subjected to cytological examination, which may reveal abnormalities at the cellular level. This analysis provides a better form of screening.

Several studies[1] show that co-testing can detect up to 29% of progressive lesions or cancers that might have gone undetected with an HPV test alone. By recommending co-testing as the preferred screening method from 2017, Luxembourg became the first European country to mainstream this method. In 2021, a total of 133,000 smears were analysed at the LNS.